British actor Simon Callow has been seen in many guises.  Here, Robin Dutt finds out about the man behind the mask.

I meet actor Simon Callow at a discreet French cafe in South Kensington. He is enthusiastic – immediately affable with a slight hurry in his step. And this hurry is understandable. Simon Callow, CBE, is a man much in demand.  In addition to his thespian work, he is a musician, writer and theatre director.

We order – he a diminutive pot of tea, and a traditional bowl (no handle) of French-style coffee for me. Born in 1949, Callow’s origin in the world of the theatre followed at a rapacious pace when he wrote a letter to Sir Laurence Olivier, at that time at the height of his powers as the artistic director of the National Theatre and of course an internationally acclaimed Shakespearian actor – something of a national treasure which the young Callow was enthused by. The great man suggested Callow join the box office staff of the theatre.

This was no rebuff to an aspiring talent – quite the contrary. It was by observing actors that Callow realised that a career in acting was indeed for him. The lessons of observation proved to be most valuable. Combining his other considerable talents, each of which so accurately typifies him, they certainly represent the sum of the whole.

It is still surprising, perhaps, that he made his stage debut 43 years ago. His various credits include Amadeus and Being An Actor (both 1984), and he directed Shades in 1992.  In the same year he starred in the TV series Little Napoleon. But arguably it was 1994’s Four Weddings and a Funeral for which he was nominated for a BAFTA award for Best Actor in a Supporting Role that endeared him to so many.

We begin to talk about the subject of this interview – what identifies his signature sartorial look. One might reasonably suppose that most actors surrounded almost constantly by costumes might not be so enthusiastic about clothes themselves – civilian dress for a player of the stage or screen.  But as it turns out, classic as his look certainly is, it is refreshingly simple and signature.

“I like clothes having a feel as well as a look,” he begins.  “I always try to buy clothes made of a fairly distinctive fabric.  Also, I am sturdily built (here a  wry smile) – large chest and short legs, so I can never really wear closely tailored garments.”

But that said the essence of great tailoring is, as Sir Hardy Amies had it, never to look too tight. Great tailoring is usually form-fitting and form following. Callow cites a great favourite of his, Issey Miyake whose genius he salutes and favours Emenegildo Zegna’s suits “which suit me well and the fabrics are so interesting.  I can’t wear very colourful clothes but I love a whole range of browns, bright copper especially.  My mother wanted me to look like a country gent which was preposterous because we were poor!”

This early “rus in urbe” look has clearly permeated and Callow is confident with the elegant simplicity and no-frills identity of his chosen garb. Clothes, though un-fussy can also be as vital as more experimental ones – possibly even more so – trusted friends in the wardrobe. Couturier and Chanel supremo Karl Lagerfeld once said something about truly great clothes becoming classics in the wardrobe.  The key word, it might be said, is “becoming”, almost like living entities.   Callow certainly understands what he believes can be style disasters for almost all. “Pork pie hats and sandals with colours all incredibly muted, make no sense at all. – as if they have been studied in a manual.  I suspect that men of my age have their clothes bought for them by their wives and betray nothing about the individual.”

Despite what one might call a relaxed, even casual ethos, the actor remembers always loving purchasing those “one-off garments which never went into production – absolutely unique and quirky”.  He cites the one-time Covent Garden boutique in the 1980s Les Deux Zebres, where small runs and indeed one-offs appealed to the urbane dandy types of the time. Today, he likes the edgy minimalism of South Molton Street’s Vertice which offers a mixture of Italian and French relaxed tailoring and some unusual Asian garments which are hard to find elsewhere in the capital.  These are unusual and limited editions, sourced by one charismatic gentleman, Giovanni, who cut his teeth in the demanding world of high fashion represented by Gianni Versace.

Here, he mentions his mother who used to work at one-time shirting stalwarts, Raelbrook where a high end range of garments was produced which might have been an early influence.  Created by one Dodi Van Del, these shirts Callow remembers as extravagant.

I ask the obvious question.  What is his take on style and fashion?

“Style is an individual sense of oneself.”  And fashion?  “A statement of idioms.”

Callow is not naturally, off stage or screen, of the visually loquacious sort. Simplicity, directness and a tangible sense of never wanting to waste time seem to permeate his very being. That is why his wardrobe must perform for him much as, but in a different way, as he must perform in his assigned costumes.  An answer can sometimes be one word – like the immediate but judicious choice of a garment.  In a recent email I sent him asking whether he objected to something or the other, the answer flew back. ‘None,’ he said as if to continue a sentence when even the odd pleasantry would be wasting time.

When it comes to a choice of simple clothes, he cites the indispensable but often elusive black T-shirt he has yet to find with a neck “the higher the better”.  It is the kind of basic T shirt that many Japanese designers (like Miyake and Yohji Yamamoto) and label Cop Copine understand so well. He here also speaks admiringly of Uniqlo’s underwear – “Fantastic!” he enthuses.  Such garments are  basic but important foundations. And this reminds of the ultimately architectural nature of clothing. The basics are ideal elements for those who are too busy to fret over details. Put your clothes on with care – and then forget all about them opined Sir Hardy Amies.  It really is a perennial lesson for all.

How times have changed. He recalls the norm of rehearsing a play in three-piece suit, similar to the unseen announcers of Radio 4, even up to the 1950s who donned black tie behind the mic. Even unseen, formality was regarded as essential, the better to deliver a voice with gravitas.

Callow, with a lifetime of costume memories, loves and has always done the effortless revolutionary style of Mario Fortuny and Paul Poiret.  “I’ve always liked flow,” he says. “Oh and Coco Chanel of the 1960s for women was amazing but whether real human beings can wear it is another matter.”

Callow worked with the designer, Jasper Conran on My Fair Lady and found the experience compelling. “Jasper, at the time, was at the height of his existence as a couturier and famously dictatorial – and mercurial – which is always a tricky combination,” Callow remembers. “He was an emperor in his own sphere. He would be pushing people about the place and yanking bits of cloth. The costumes were exceptional. When we talked together, we got exactly what I wanted. Jasper and I understood each other immediately.”

When it does come to suiting (and apart from the chic ensembles of Zegna) Callow hugely admires tailor Tom Lutwyche. “He made a most exquisite suit for me when I played Oscar Wilde.  I love watching the art of the cutter.  My grandmother was a seamstress – wonderfully good – and used to make fancy-dress for me.”

So, as might have been suspected all along, threads are part of his performing DNA.  And as to the suit he would choose if he had only one choice? “The suit I was married in – oatmeal flecks, beautifully cut.  It is transformative.”

And that is surely the essence of any element of fine tailoring.  Indeed, it does transform but without subsuming any of the individuality of the wearer. 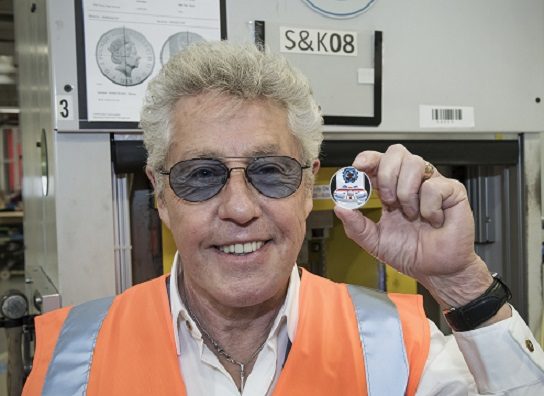