The first time I meet Anna-Louise Felstead, we are standing beside a cocktail bar at Henry Poole & Co on the first evening of the Concours on Savile Row. Outside, vintage cars are lined up in both directions, from a Ferrari Testarossa Spider to a 1964 Jaguar E-Type Coupe and from a 1937 Bentley 4.5-litre Gurney Nutting Sedanca Coupe to a Morgan Super 3. Inside, car enthusiasts and tailors, fashionistas and film stars are enjoying the friendly jostling and bonhomie of the crowded bar as they chat about how the exquisite style of a Savile Row suit compares with the fine lines and eye for detail seen in the classic motors on display. 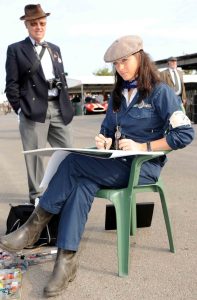 The second time is a few weeks later when Anna-Louise – known to her friends at A-L – has found time to meet at Vardo, a popular restaurant near Sloane Square, to talk about her love of art and, particularly, her love of painting and drawing motor cars. A-L is a well-known face at Monaco, Le Mans, Goodwood and Pebble Beach out in California, to name just a few of the places she has worked which are famed for their motoring heritage. “The Concours on Savile Row was a delight,” she says. “I love being around cars and car people and to see all those vintage motors in one place was a real treat. Magnificent cars and delicious cocktails. What’s not to like?”

A-L, who trained at Central Saint Martins and the Royal College of Art, started painting cars when she was introduced to James Wood, a well-known driver of historic cars. “James suggested I should paint pictures of racing cars,” she explains. “He sent me pictures of him racing in Monaco so I went down there with him in 2008 where he introduced me to lots of people. I started painting pictures in the paddock and, before I knew it, I was being commissioned. People would wander past and see me at work and buy them on the spot. I was asked if I was going to Monza, to Spa, to Goodwood, to the Nürburgring, to all these car events and it spiralled from there.”

As her reputation as a talented painter of cars grew, one interesting side-line – which she calls her ‘naughty car paintings’ – emerged. A-L takes up the story. “I was at Pebble Beach in 2010 and an Aston Martin dealer approached me and asked me to paint his car. He sent me a picture of it but asked if I could paint his girlfriend in the picture too.

“I said: ‘Absolutely – just send me a picture of her as well’.

“He said to me: ‘Well, if I send you the pictures, I don’t want you to be offended’.

“What do you mean? I asked.

“‘Well, she’s wearing quite provocative clothing. We’re into bondage. Is there any way you could give the painting a slight bondage theme?’ 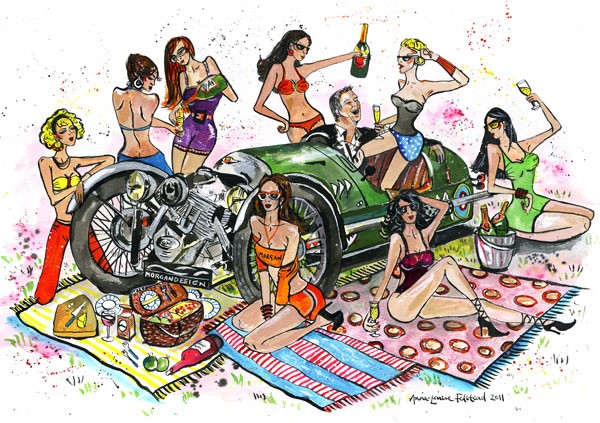 “I said ‘sure’ but wondered ‘what have I got myself into here?’

“I returned to the UK and he sent me some pictures of a woman in a tight black PVC mini dress and stockings etc. I produced a sketch which he approved, he just asked me to change the whip I’d drawn into a paddle. Not knowing what that was, I Googled ‘bondage’ and quickly found a lot of inspiring material… When I produced my final painting (with a few additions to really get the theme across) he cracked up with laugher and said ‘I can’t hang that in my office!’

“What did you expect? I said. You commissioned a bondage painting! I think it ended up hanging in his downstairs loo…”

A-L put the picture on Facebook, tagged a bunch of her car clients and friends, and was inundated with requests from people asking her to paint their cars. “I had one client in Switzerland who commissioned 30 original paintings and they are all hanging in his garage. He loves the reactions they provoke. Recently, I had a stand at Salon Privé. I had all my reportage paintings of Monaco up on the wall but put some unframed naughty ones in a browser, so people could see them and, surprisingly, they were incredibly popular. People are very amused by them. They are not too rude, just a bit of cheeky fun.” 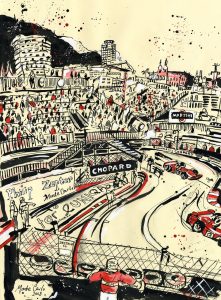 A-L was destined to be an artist from childhood. “I always drew from a young age,” she says. “My father used to come back from his job in the City with these empty diaries and I would fill them up with sketches. I knew it was something I was good at and my friends at school would ask me to draw things for them.”

When she was training, A-L became aware of the work of Linda Kitson, the official Falklands War artist. She says: “I really liked her work and, at a family wedding, I was sitting next to a sub-mariner, telling him how I’d love to do what Linda Kitson did. He clearly knew someone because I was then invited to go and stay on HMS Cornwall in Plymouth. I spent a week at sea, sketching the Royal Navy at work, in the ops room, in the mess, doing man overboard exercises, fire exercises. I’d do drawings all over the place and I ended up having an exhibition of my paintings at the Colville Place Art Gallery in London.

“I was then invited to board another ship, HMS Illustrious, the aircraft carrier. I was flown in via SeaKing helicopter and did a load of drawings there and had another exhibition at the Naval Club in Mayfair. I was actually invited for a whole year away with HMS Cornwall but turned it down because I was about to start my MA at the Royal College.”

A-L is clearly delighted to be an artist. “I absolutely love my life,” she says. “I’m very lucky. No two days are ever the same. I’m my own boss. I work hard. I don’t have to be at a certain location. My philosophy in life is to say ‘yes’ to everything and do as much as I can because I think you have a more interesting life by saying ‘yes’ to stuff. I was amazed by friends who said they couldn’t work for themselves – that they would never get out of bed and would watch TV all day. That drive of not knowing where my next pay cheque is coming from excites me. I have a young son who takes up a lot of my time. I’m a single parent. I can’t afford to sit around all day going for long lunches. I get up in the morning, take my son to school, go for a run and then start my day’s work. Last weekend, I drove down to the Le Mans Classic, bumped into a bunch of friends who introduced me to other people and I already have a few commissions.” 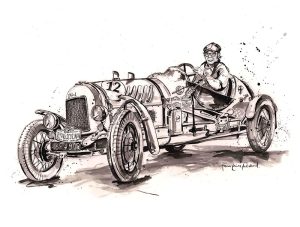 When I ask A-L to describe her style, she is quite definite. “I would call my style impressionistic,” she says. “I’m not interested in representing something in a photographic way. I prefer drawing from life rather than from my imagination. I am envious of people who can create incredible illustrations from their head although I like to be physically in front of something.”

Looking to the future, A-L is planning on bigger and better works of art. “Because I’ve always worked on location, the majority of my paintings have always been in a size and format that would be easily transported. Now, I’ve got a fantastic studio in Earlsfied which allows me to work on a much, much larger scale.”

The life of an artist has certainly allowed A-L to travel the world. She says: “Before my son was born, I lived in Cornwall, Sussex, New York then Wiltshire. I was tempted to move to Singapore for a while. I go to Pebble Beach every year. I’ve never really stayed in one place for too long. And I don’t just paint cars. When I was in New York, I did lots of abstract cityscapes. I’ve got a couple that I won’t sell. They are only small, but I just love them.” 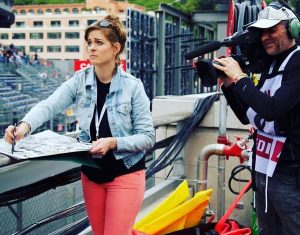 One area A-L thinks might interest her in the future is working on TV. “I was being filmed as I was painting when I was at the Silverstone Grand Prix a few years ago and Sebastian Vettel and Mark Webber, who were racing for Red Bull at the time, were looking through my portfolio of paintings. I then received a phone call from Formula One Management. We went for a brief chat and drink at Chelsea Arts Club and, before you know it, I was covering the Singapore World Championship for FOM. That was an amazing experience. I had to interview Lewis Hamilton, Valtteri Bottas, Christian Horner, Ron Dennis and Niki Lauda. I was nervous – it was quite overwhelming, actually – and I realised presenting in such a pressurised environment wasn’t for me. To do that job, you have to be quite pushy and that’s not me. However, in a non-pressurised environment, I would love to do more TV work. I’ve done quite a bit with my mother and sister and it’s a lot of fun. I tend to get on with people, I don’t find that difficult, but race-day morning, with a very famous F1 driver, I was completely star-struck. He did not want to talk to me. He gave me quite a hard time and I wasn’t comfortable at all. I’d had no training and was thrown in completely at the deep end.” 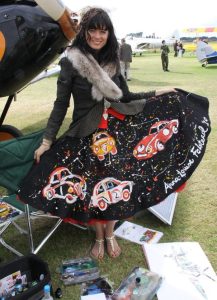 Whatever else the future holds, A-L is certainly not going to be very far from a vintage car for long. “I fell into this world quite by chance and I love it,” she says. “I will always paint cars because I find them fascinating. There are a lot of collectors and dealers I know in London who I go and see. It’s like a travelling family in a way. You meet such a mixture of successful, enthusiastic, talented and interesting people who all come together for their genuine love of the sport and I really love that about the historic car world.”