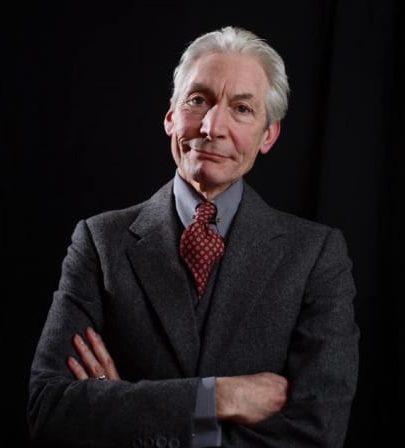 When Charlie Watts died in August at the age of 80, a music journalist expressed what surely all had thought for a long time. Not so much that the Rolling Stones would never be the same again (which is self-evident) but more importantly, did we ever imagine that it would be the “quiet one” of the group who would sail forth first? Many writers and observers have identified the fact that Watts, with his innate calm and cool, made all the others in the band look like they might not have to be quite so “out there”.  The contrast was striking.

Too Cool for School? Mr Watts would have probably disagreed. Every drummer in every group suffers, perhaps, from the same fate. His equipment, whilst being the essential blood-beat, acts also as partial barrier and fortress whereas the others can leap about to their hearts’ content with their stringed axes or saxes. And they are always standing, dancing or rushing about, whereas the drummer must, for the most part, occupy a disc of a seat, trammelling meaning through sticks and skins but for the main part, hidden by the paraphernalia. But there was a time (brief as it was) that the whole band (like The Beatles) did indeed wear practically matching suits and a Cuban-heeled boot was also not far away. Early 60s television stills will bear this out. But it was Watts who unwaveringly sported a suit – then and throughout his near 60-year tenure in what has been described as the greatest rock band in the world. 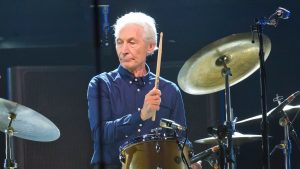 When it came to his sense of dress, it is not difficult to understand why he has been lauded for his exquisite sense of sartorial style. For example, Savile Row’s William Dege recalls encountering this dandified figure as a boy of 12 and noticing how transfixed Watts was about material and how much he enjoyed and engaged with the identity of a tailoring establishment. At the time, the cutter was making a replica of an Army Flying Corp service dress coat. It is a given in sartorial circles that garments with a military or equestrian past are more than referential to the lore of Savile Row and tailors of note the world over. Whilst Mick Jagger’s suits were really, on most occasions, glam showstoppers – some even reminiscent of the gloss and deliberate femininity of Marc Bolan’s satins and velvets – Charlie Watts’ threads were slicingly traditional and purposefully plain. But plain need not mean dull and in Watts’ case they never were. The double-breasted coat became synonymous with his style – neat, encased, formal and ready for all occasions. However smart a single-breasted example might be, the double has the edge and with a slightly wider lapel – not comically cut, of course, nor experimentally, this gives a new and well-found gravitas to a classic in the wardrobe and a garment to rely upon. It is almost impossible to look slovenly in a well-fitted, buttoned up double-breasted coat with minimal float.

But even Bolan started off as a Mod and the Mods were known for their take on English tailoring – ultra fitted and with spareness of cut being the central feature – much like the minet youth movement of France – the closest equivalent. And Watts, who was introduced to tailoring by his father in the form of a visit to a traditional, Jewish East End tailor, never forgot the language and power of a well cut and appointed suit. And this simple idea can look even more radical when pitched against floaty silk blouses and velvet loons, or tumbledown denim with rips and tie-dye ethnic-inspired tunics – worn in all seriousness – by men. Charlie Watts always said that he did not fit in with the rest of the Stones on the dress issue and, although there are indeed images of him at the drums in precise, minimal T-shirts, when younger, he did drum in a suit. Watts owned over 200 suits and bought lavishly but with good taste from tailors such as Tommy Nutter and Chittleborough & Morgan and whilst eschewing the soft ‘shoe’ shuffle of his bandmates love of casual footwear (he loathed trainers) patronised the internationally feted George Cleverley. Now, in this latter case, anyone who has beheld a Cleverley masterpiece will understand its seduction. I once bought a pair of vintage Cleverley’s with the original trees, which were not my size. But, as sculpture for the book shelf, they were a constant reminder of elegance and the craftsmanship of a seasoned artisan.

Each tailor, each shoemaker of any worth surely has his hallmark and the discerning customer is very quick to understand this and to also comprehend what suits him. Perhaps Watts in the annals of rock and roll is nothing new when it comes to choosing suits. Think of what suits have done (after they put away the glitz and glitter) for David Bowie or Bryan Ferry or Robert Palmer come to that (for whom there was no glitz and glitter period).  The direct contrast Watts made with Mick, Ronnie and “Keef” – and, for a time, Bill was more than palpable. It was perhaps predictable that Mick would embrace suiting at some stage and his memorable wedding suit (echoed by bride, Bianca) somehow still looked more costume celebratory than pared-down calm.

At heart, and everyone says it, Watts was a jazz musician and his love of a well-cut suit stemmed from the influences of musicians such as Gene Krupa, Art Blakey and Buddy Rich. Perhaps Nelson Riddle and Frank Sinatra can also be included in the canon of stars who meant something through their precision of presentation. But, then, they came from an age which understood the stage and the need to convey a strident look which was aspired to by countless men who bought expensively – if they could, or on a budget for those who never would be able to. Still, chosen with care, suiting can simply suit most people. Watts believed his taste to be “old fashioned” but this comes with a proviso. Whilst mutton and lamb should not necessarily spring to mind, Watts was aware that a middle-aged man (or older) does not put on the clothes of a twenty-something year old – and be taken seriously. This is helped, of course, if one’s original choice was never loud or brash in the first place. Sir Hardy Amies was a keen advocate, trumpeting about never being too tight or too fashionable and favoured the wearing of “appropriate clothes”. Watts would surely have understood this stance. Joe Morgan (of Chittleborough & Morgan) refers to Watts’ innate style of glamour – which is not only appropriate when describing female, visual charm alone.

“Mr Watts always knew what he wanted. He liked a structured look with a masculine chest, crisp shoulder line and a narrow waist. He enjoyed his clothes and chose to wear suits to represent himself in the best possible way.” And, crucially, Morgan finishes with – “He was the epitome of tailored elegance.”

And, as ever when it comes to bespoke tailoring, where one “bespeaks (or speaks for) the cloth”, it is the subtle, personal details which count. The customer, of course can have anything that is cuttable and sew-able but if he is a sensible and sentient man, he will never ignore the advice of his tailor – which is given because of years of training and a bank of knowledge. It is not simply a matter of fit but personality too and, at the very base, the functionality of a garment that counts the most.

With his love of a well-constructed suit, it may be surprising to know that Watts never wore excellent bespoke second-hand vintage suits – even if they fitted him and were in pristine condition. And it has nothing to do with a stigma or indeed the fact that they may come with some family curse or other. We still, after all, use the term, “dead men’s shoes” to describe vintage or even charity finds which seem to cast a clinging, superstitious shadow. Watts’ point was that the wearer had to make the garment his – from the first. But, of course, one can (and should) be inspired by the past. It’s a rich country where indeed, things were done differently when it comes to the world of tailoring of the first order.

Alexis Petridis, writing in The Guardian very soon after Watts’ death, refers to this ultimate drummer as possessing “unshowy brilliance”.

No-one would – or could – disagree.