Why ties and cravats are here to stay

Why ties and cravats are here to stay 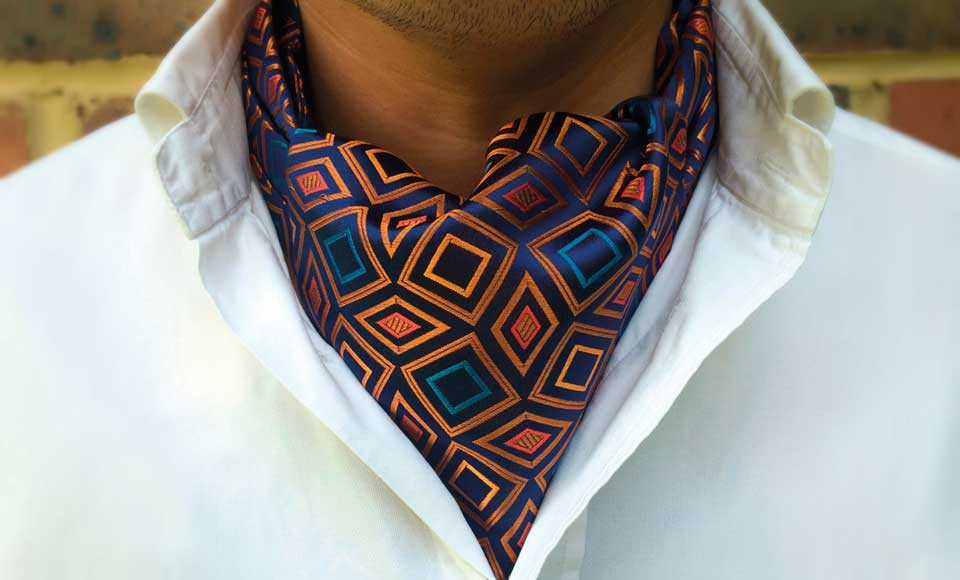 A touch of the peacock lurks in most men, even now in this time of down dressing, and the wearing of a well designed tie or cravat fulfils that sartorial must have, as it has done through the ages.

Despite attempts to loosen the tie’s grip on the civilised man’s throat, this strip of silk, ideally the fabric of choice, continues to hold on for dear life. As a fashion statement, it has had many incarnations, from broad to narrow, and back to broad.

Men’s neckwear has been around for a very long time, with the first recorded mention dating back to 210 BC in China. In Xian, the clay terracotta warriors guarding the tomb of China’s first emperor, Qin Shi Huang Di, can be seen to be wearing this fashion staple. The story goes that the Emperor commanded that his army should be adorned with ties as an indicator of the honour he accorded them by being recreated in clay to forever guard his earthly remains.

Italy’s obsession with fashion might also have its roots in history. In ancient Rome, the Emperor Trajan erected a column carved with replicas of his army; the soldiers are all wearing neck ties of varying kinds. Like the Chinese Emperor, this was Trajan’s way of signifying the respect he felt for the valour of his men, and at this period in history Roman orators wore neckerchiefs to protect their vocal chords during the cold winter months.

In the 17th century, Croatian mercenaries were recruited by Louis Xlll to fight on France’s side in the Thirty Years War. The King was intrigued by the scarves wrapped round their necks, and called their neckwear “La Cravate,” the French name for a neck tie to this day. This fashion fad quickly crossed the Channel, and King Charles ll is said to have spent £20 on a lace cravat, the equivalent of £1,800 in today’s money. The well dressed man of that era also wore cravats made of embroidered linen, cotton and plaids.

Fast forward to the early 19th century and we have that arbiter of masculine elegance, Beau Brummel, who introduced a stiffer, more formal version. He always liked to have the morning ‘well aired’ before he got up, and spent several hours each day preparing to preside over the world of men’s fashion. His dictum was: “No perfumes, but fine linen, plenty of it, and country washing.” If his cravat did not correspond to his sense of perfection in its first tying it was cast aside, and his valet was seen one morning leaving his dressing room with an armful of creased cravats, solemnly referring to them as “our failures.” 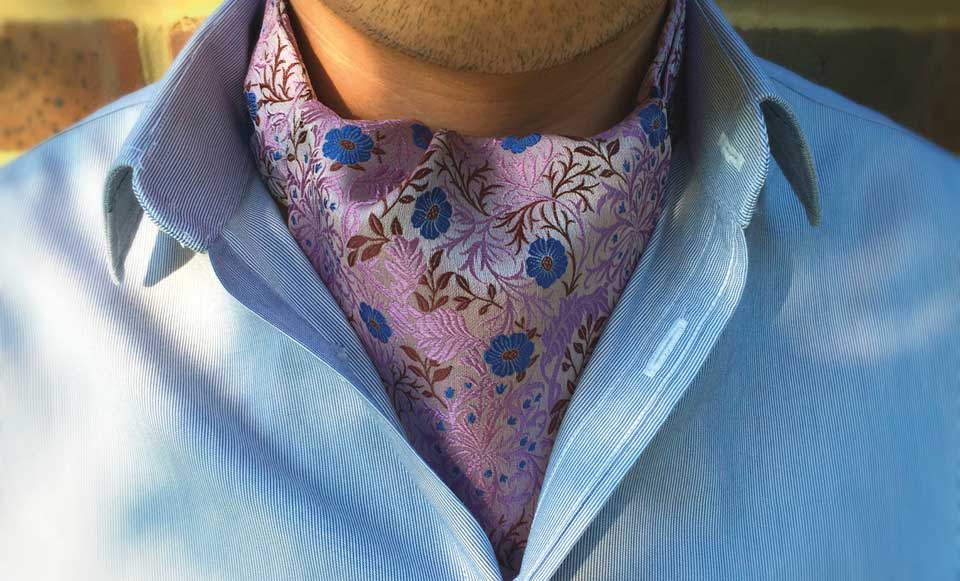 His patron and friend was the Prince Regent, later George lV, but Brummel openly antagonised the increasingly corpulent Prince. The crunch came when he asked a fellow guest at a reception, “Whose your fat friend?” and on another occasion ordered the Prince to “Shut the door, Wales.” This act of impertinence was the beginning of the end for the royal favourite, and in 1816 he fled to France to escape his creditors. He died penniless and insane from syphilis in a French asylum in 1840.

So much for the fortunes of high fashion, but his contribution to the revolution in men’s clothes and the introduction of understated, but perfectly fitted and tailored bespoke garments, of which today’s classic suits are the legatees, was commemorated in 2002 by the placing of his statue in Jermyn Street.

Later in the 19th century the Brummel look was adopted by Oscar Wilde and other members of the aesthetic movement. It mutated into different forms, notably the Ascot tie worn with morning dress, but in the 20th century, the day cravat, a silk scarf worn under an open necked shirt was taken up by film stars such as Cary Grant, David Niven, Michael Caine, and Roger Moore. The choice of the stars was copied by thousands of young men who hoped that some of the glamour of these film icons would rub off on them. Fashion pundits are now predicting that the cravat is due for a comeback.

The long tie as we know it today did not emerge until the late 19th century but since then has undergone many – often subtle – changes. It is all about modern man’s expression of his own style.

Not to be ignored, of course, is the celebrated Windsor Knot, believed to have been made popular by the Duke of Windsor, although there is a school of thought that it was named after his father King George V. The Duke preferred a wide knot and had his ties specially made to produce a wider knot when tied with the conventional four-in-hand knot. From James Bond to John F Kennedy, the Windsor Knot is still today regarded by many as the sign of a true gentleman. It is particularly suited for a spread or cutaway collar, and needs a tie that is about four centimetres or 1.6 inches longer than a conventional tie.

Still flourishing are ties that mean something to the wearer, an identification, an affinity to a group. Some years ago ‘The Book of Ties,’ now out of print, published a listing of 749 special ties, old school ties, graduates, the armed forces, the Inns of Court, any number of sporting clubs, the London Livery Companies, Guilds, the jokey ‘One Holer’ for golfers who have shot a hole in one, and so on.

Regimental and old school ties have gone on to inspire many similar designs, and of course there are those who wear the authentic article who are not entitled to. Con men, in particular, have adopted this trick as a means of suggesting a gentlemanly, trustworthy character. Not surprisingly, those with bona fide credentials for wearing the tie of their regiment or their old school take great exception to their tie being usurped.

A walk through the City of London on a Friday, during working hours, shows many younger men not wearing ties. This was unheard of not so very long ago, although you can be sure that they have one tucked in a pocket or a desk drawer ready for a quick switch if summoned to the board room or some other higher authority.

Ties say something about the wearer, from the more muted designs to the flashy, and are one of the few ways left that 21st century men can express their sartorial personality. They are here to stay.