The Last Detail: The stick pin has pinpoint charm

The Last Detail: The stick pin has pinpoint charm 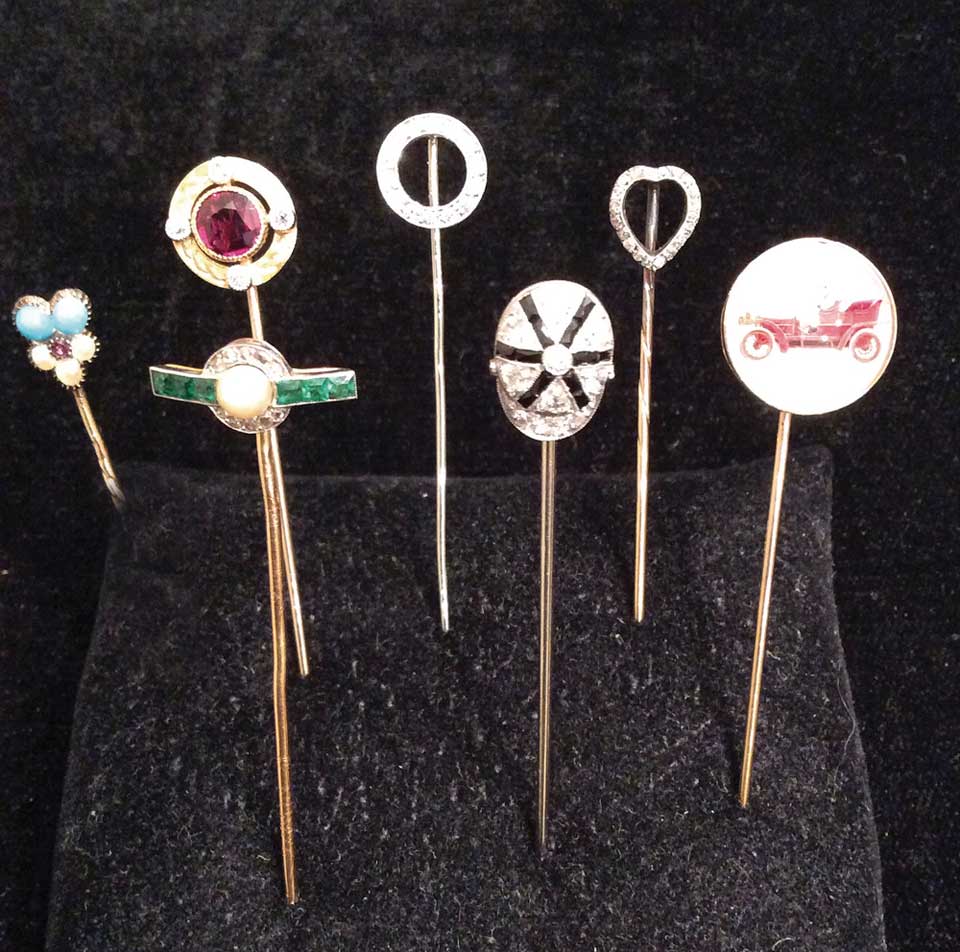 Few items in the male wardrobe describe the exactitude and elegance of choice, like the stick pin. Although often considered under general descriptions of tie pins and somewhat erroneously, tie clips, the sartorial stickler regards a stick pin as something far more rarefied and important.

First popularised in the early 19th century as decorative and functional devices to hold a cravat in perfect place, they still have more than a home on the gentleman’s dresser – even in the 21st century. Although it must be said that most may regard them as the finishing touch for a formal occasion such as a wedding or Ascot for example, to see a gentleman sporting one with divine insouciance as he saunters to and fro his clubs is a genuine delight.

Fortunately (although not made in the profusion of yesteryear) it is relatively easy to track them down in antique markets – Covent Garden on a Monday, the bijou square in front of the Wren church on Piccadilly on a Tuesday, of the many rambling stalls on Portobello Road on a Saturday. And certainly no hunt for a stick pin can be complete without a leisurely amble down Burlington Arcade or Gray’s Antique Market off Oxford Street. Julie Robinson once described stick pins as “tiny works of art” and indeed some of them can be veritable, wearable sculptures – intricate and composed of several elements.

The Victorian gentleman and even the counter jumping masher or swell would not be considered dressed, let alone well-dressed, without this final touch, and popular motifs included flowers, cameo portraits, insects (particularly butterflies and spiders), shields, stars, animal heads and sporting emblems such as horseshoes and horns all worked out as plainly or elaborately as the buyer’s wallet allowed. Most of the examples which hail from the 19th century are made out of nine or fifteen carat gold, often festooned with rose cut diamonds or semi-precious stones. And for some lesser gents, a panoply of base metal examples with glass instead of jewels are readily available too. But those unfortunates won’t be reading this!

The functionality of stick pins echoes that of other types of jewellery. Relatively rare memento mori examples featuring carved Whitby jet or often amethyst surrounded by pearls (to symbolise tears) and indeed, strands of the departed’s hair arranged in delicate shapes, locked in rock crystal can be unearthed but command high prices – especially the mid to late 18th century pieces. There are many examples which draw their inspiration from the hunt – horses, fox heads, running hares and the like. And just like the majority of jewellery they are relatively easy to date, echoing as they do, the stylistic details and changing fashions of the times from high Victorian through leafy-languid Art Nouveau to snappy Deco-jazz minimalism.

Recognising not only the demand for stick pins but a fascination with the unusual, many manufacturers began offering strikingly unusual forms – in many cases resolutely novelty pieces – which performed on the expanse of a cravat as a talking point.

The Victoria and Albert Museum has in its jewellery section a most compelling example of a skull stick pin, circa 1880s, not in itself a novel idea as skulls were very popular motifs as they are today if we consider the creations of contemporary designers such as Vivienne Westwood, Alexander McQueen and Jeffrey-West. The difference with this skull pin is that it was connected to a battery worn on the inside which caused the jaw to open and close and the diamond eyes to dance.

Some pins concealed small lead pencils or tiny reservoirs for Poirot-style fresh blooms. Yet another model introduced in 1919 had a star motif disk-like head concealing a small drop of radioactive material. But of course for the gentleman who eschewed such novelty-fuss, a single discreet diamond, or Baroque or perfect pearl is stunning in its costly simplicity.

Then, if not so much today, wearing more than modicum of ‘essential’ jewellery was frowned upon. A pocket watch and chain, a signet or wedding ring were acceptable but multiple or stacking rings, heavy chains and brooches would have you down as a Brummagem, especially if they were composed of base materials masquerading as the real deal. This is alluded to in ‘The Gentleman’s Art of Dressing with Economy,’ published in 1876 by the enigmatically anonymous, ‘A Lounger at the Clubs’. He states somewhat sensoriously, “I should always mistrust the man who in cold blood goes in for mock jewellery,” before adding somewhat bizarrely, “nothing short of half rations or impending starvation would induce me to stretch my legs beneath his mahogany.“ Quite.

Several antique homemade examples have a discreet charm, many made from old coins whose dates celebrate some event, or fugitive Georgian orb Regency buttons in cut and polished steel rivets, paste or enamel surrounded by spangles. Indeed there is a panoply of materials which have been made into stick pins such as shell, crystal, horn, vegetable ivory, coral, mosaic, wood, tombac (turned zinc) and slices of bevelled mirror.

But do beware. If there isn’t a word to expressly describe the addiction to collecting stick pins there certainly should be. This writer knows only too well their pin point charm.