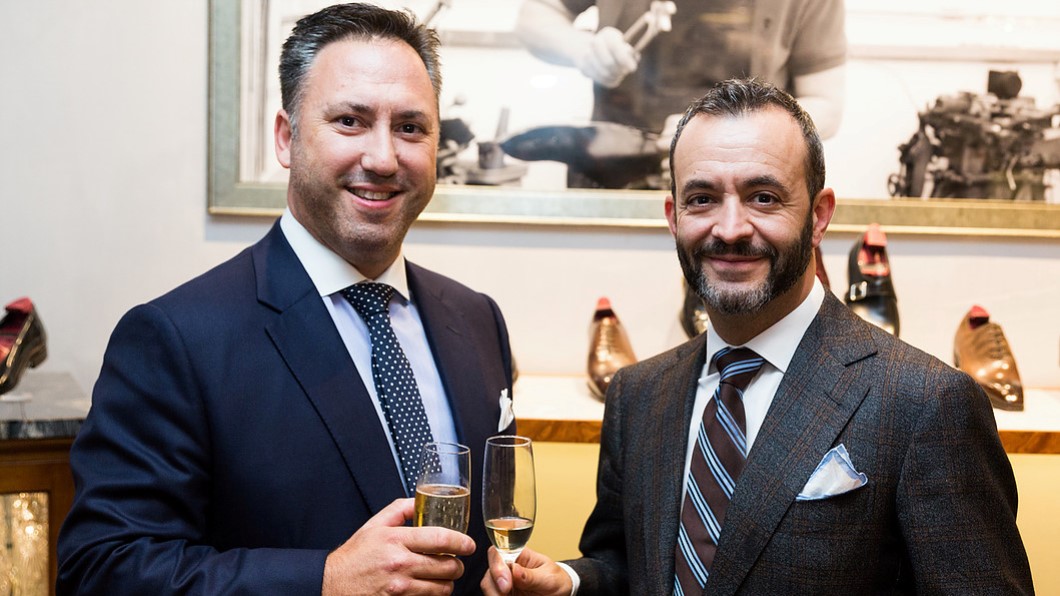 Tony Gaziano is in no doubt. “One of the best decisions we made was to be on Savile Row. There is not another street in Mayfair that I would prefer to be on,” he tells me. “In fact, the only thing I would change is that I wish we had done it earlier!” Tony is one half of Gaziano & Girling, the high-class shoe company he and Dean Girling formed back in 2006 and which moved into No. 39 on London’s finest street for fashion eight years later, and Tony can’t contain his delight at the success of their decision.

“The company was taken more seriously after we moved on to Savile Row and has grown rapidly since we have been here,” he says. “It was 2013 and we had decided we wanted to open a shop but didn’t quite know where. There was a choice of three or four locations – Jermyn Street, the Burlington Arcade or the Princess Arcade, or Savile Row. We thought Jermyn Street was a little bit tired as well as over-saturated with shoe brands, and the arcades were not really where we wanted to go, so we chose Savile Row, which has proved to be the best possible solution. We can feed off the tailors as there has never really been a good shoe shop on Savile Row and we have a lot of friends here. Since we opened the shop in early 2014, we have never had a negative week.”

Sitting in the leather armchairs at Gaziano & Girling, you feel you are in a business which has been established for many years. The fine shoes on display, the relaxed atmosphere – not to mention the excellent coffee – all combine to transport you away from what is a retail outlet to the comfort of a your favourite club. All very impressive, certainly when Tony recalls the first days of the company, back in 2006.

“I had a workshop in my garage in Kettering while Dean was working from his shed in his garden in Norwich,” says Tony. “If we wanted to meet up, one of us faced a two-hour drive. There were certainly some scary moments at the beginning but we backed ourselves and always had confidence in our ability. We knew we had to produce shoes that were better than anyone else was producing.

“We were competing with other companies with more than a hundred years of history behind them and the only way to pull people away from that was to make a product that was outstanding enough for them to want to come to us. And that’s what we did. We cut no corners. We made the product exactly the way it should be made; we made it a little bit younger and a little bit sexier and people fell in love with what we were doing. It couldn’t have worked out any better. Our customers tell us we have done so much in such a small period of time.

“It took us two or three years to be confident we had a flow of customers who were going to keep us in business. After the first couple of years, we looked at producing a manufactured product as well as the bespoke. We invested in a factory and employed another three or four craftsmen to work with us and got stuck into the manufacturing side. We even brought in some Victorian machinery which we had to rebuild to bring back to life. We invested a fair amount of money in the project but it was done in an organic way in that it was money we had made rather than money we had borrowed.” 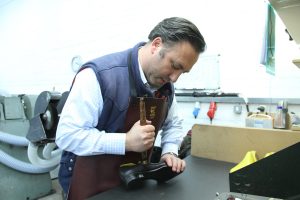 Tony and Dean, pictured left, met when they were both working for shoemaker Cleverley’s in London when, between the two of them, they would complete a pair of hand-made shoes. Tony recalls: “We had built up a relationship by me doing part of the shoe while Dean did another part so we were working as a team. We weren’t actually in the same workshop but every time Dean came and saw me he’d turn round and say ‘well, why are we doing this for another company? Why don’t we do it ourselves for our own company?’

“I took a bit of persuading because I had a mortgage and children but I spoke to a few friends and customers in Japan who said that, if I went to see them, they would place orders. The first thing I did when we set up the company was to jump on a plane and fly to Tokyo. I took orders for around 20 pairs of bespoke, customers trusted us enough to pay a deposit and that was enough to get us going.

“For the first couple of years we were purely making bespoke shoes, first for the Japanese market and then we expanded over to America and cities like New York, San Francisco, Chicago, Boston and Washington.  In our first six years, 95% of the business was overseas. With bespoke, the service is only as good as the craftsmen who are working on it. It’s a bit like being a chef in a restaurant. If a chef moves, the clientele will move as well because they are following that talent rather than stay with the restaurant. We were fortunate enough that, when I left the company, a lot of customers who had become friends followed.”

As you would expect, Tony is virtually evangelical when it comes to the importance of good footwear. “We spend a lot of time on our feet so if the shoes don’t support you and they are not comfortable, you aren’t going to be happy. If shoes don’t fit correctly, you walk about all day with a cloud above you. We want to make you a pair of shoes that you forget you have got on your feet. The longevity of a bespoke shoe is also important. They can be repaired many more times than a readymade shoe. Because the shoe fits correctly, it wears correctly. Customers can have our bespoke shoes for 20-plus years.

“There are also the aesthetics. When you make shoes by hand, you can achieve shapes and proportions that machines never can. You can create a pair of bespoke shoes that look more like an ornament than a shoe. It surpasses function and becomes something beautiful. A lot of men who are into luxury can appreciate that. A lot of guys now prefer a single piece of leather. They know that, when a shoe is made out of one piece of leather, it has to be cut out of the prime part of the skin whereas, with a brogue with a lot of sections, you can cut around imperfections in the skin.

“Colour has become more important. Shoes have become more and more colourful, whether that’s rich chestnut colours or a striking blue. People in places like Singapore or Hong Kong like bright shoes while people in England like black shoes. In France, they like colourful shoes while the Americans and the Italians like tan shoes. We make a lot of rich coloured shoes. Men are also learning how to accessorise, something which women have always done. One of the reasons men have not worn colourful shoes is that they don’t know what to wear them with but now they are becoming more aware of what shoes to wear with what suit and what shoes to wear for certain occasions.”

For Tony and Dean, the future is there for the taking. “I get a buzz out of developing new styles and, looking forward over the next five years, we would like to have at least two shops similar to this one around the world, maybe in New York and in China as well as building on the British market,” says Tony firmly. “Our ambition is to become, without a doubt, the most prestigious company you can go to for a pair of shoes. That, quite simply, is our goal.”

An ambitious goal indeed but I, for one, will not be betting against them.

Tony Gaziano, shown here at work, talks us through the process of producing a bespoke pair of shoes 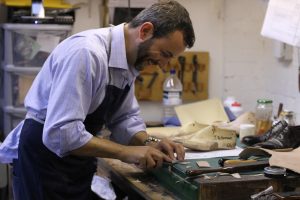 The first thing that would happen is that you would go through a quite extensive measuring – some 15 to 20 measurements – widths of your foot, lengths of your foot. You would also stand in a mould box which would take an impression of your feet so we can produce a plaster cast of the bottom of your foot so we can get all the angles right. In all, the whole measure takes about 40 minutes to make sure that whatever you are ordering fits you as it should. We would then discuss the kind of style the customer might want but we don’t go into detail of leathers and soles. From the plaster cast of the bottom of the foot, we get some beech wood and carve out the dimensions of the lathe which represents the foot. That is tricky – it is probably the most complicated part of shoe making because not only do you need to get the shoe to fit the customer in the way the customer wants that shoe to fit but also the way we want the shoe to fit. The same formula can’t be made for two different customers because you have two different mentalities. We will then make up to three dummy shoes and the customer will come in for a fitting. We can then cut the shoe open – we cut a hole in the toe, a hole in the side, a hole in the heel so we can see inside the shoe to see exactly how the shoe fits. We would then make some alterations and then make another fitting shoe and then another fitting shoe. For a new customer, it can take up to six months just to get to the ‘fit’ stage that both the customer and we are happy with. Once we have reached that stage, then we make the shoe up completely. The first pair would take between 10 to 12 months. A second pair would take between four to six months.