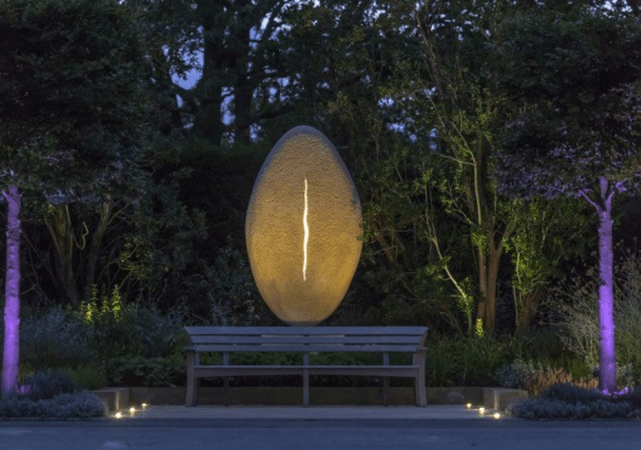 ART – A Festival of Light and Stone by Nicolas Moreton 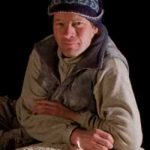 Nicolas Moreton is one of those truly gifted sculptors who revels in his love of past giants who wielded the chisel, writes Robin Dutt. ‘Making a Mark’ is a fine retrospective show of the creator’s signature style – whether gargantuan figures, cosmic or mythical symbolism, experiments in pure shape – or stone, bleeding halogen light. He began stone carving in 1985 but his output is so prodigious and ambitious that he made up for what anyone might call ‘other pursuits’. Purposefully sensual and sexual in content, these large male and female forms are suffused with a brooding, primeval energy and when, in some rarer cases he utilizes silk, paint, gold leaf, metal or Cedar Cones, he explores what is possible when conveying expression in unusual ways. The silk and stone are immediately evocative, for instance helped by the vividness of the chosen blood red hue of the silk. This piece is purposefully called, ‘Transition’.

The temptation might be to recall the magnificent work of such masters as Epstein or Moore and Moreton, pictured above left, would probably not disagree but he has certainly made a particular brand of sense, sensuality and sexuality his own. Many times, he presents his figures without faces – or if they have ‘faces’ then these might be embellished instead of detailed with eyes, nose, mouth or in one case, ‘Sunflowers (Man and Boy)’ he presents the reality of a guardian generation, the father with his son – both figures sporting the dense seed network of a rough, circular sunflower bloom.

This may not be the weather to want to spend too long outside, instead of dreaming of roasting your nuts by an open fire, but that is exactly what Moreton wants to encourage. The show is at New College, The Cloisters and Ante-chapel where so much of the work has been set in the context of the natural world. It is a harmonic union for the very material he uses can trace its origin to beneath the earth or as outcrops from marble cliffs. These materials such as Kilkenny Fossil Limestone, Ancaster Weatherbed Limestone, Clipsham Blue Limestone, Corremie Pink Granite or Portuguese Marble all have their distinct characters and qualities and Moreton is intimate with all their personalities.What is right for one construct is surely not so suitable for another. He respects and adores what nature has given him to play with but as a very contemporary worker in stone, he has some very contemporary ideas of production, too. As Miles Young, Warden, New College, Oxford points out – lest we do not know or are apt to forget, –

…’Moreton is no slave to tradition. He is a consummate craftsman
with a highly developed skill in direct carving into the stone, but he uses
tungsten carbide reinforced tips for his chisels and polyurethane for
his mallets which gives him the advantage over Michelangelo, and his
diamond sponges enable him to polish the surface of his stone carvings
to a brilliance which Henry Moore would have envied’.

Moreton attracted the attention of such enthusiasts as jazz singer George Melly and strident, brilliant critic, Brian Sewell who both had pieces in their private collections and Lord Archer is also a fan.

And showing his eager hand when it comes to experimentation in this type of sculptural work, he presents in this latest show, a selection of his tactile, almost hypnotic and atmospheric pieces such as ‘Chrysalis’, ‘O Joyous Light’, ‘In the Beginning’ and ‘Catherine Wheel’ where he makes use of lights, whether LED or Halogen. These might certainly take the chill off a winter visit to the show. The latter in particular adds a surprising element to his work where the light appears to mimic trapped molten lava. Or in the case of, specifically, ‘In the Beginning’ the structure is flagrantly sexual in its shaping and meaning, the crack of light, glowing within as an invitation and a reminder from where all life starts. It might of course, be read as a simple shape, an element of space, a potent decoration from a science fiction mansion and more – but knowing Moreton’s touch, the link with creation is too strong to ignore. It looks like an egg cracking open, the beginning of a stellar journey.

‘She sits, waiting, expectant. Her hands are raised ready to
catch the fertile waters of life from the sky. When the rains come, they
cascade down her fertile core and then into the earth beneath her. Her
stone pedestal represents the earth and the rivers of our world’.

Making a Mark – A Retrospective Exhibition of Sculpture by Nicolas Moreton is at New College and Ante-chapel, New College Lane, Oxford, OX1 3BN