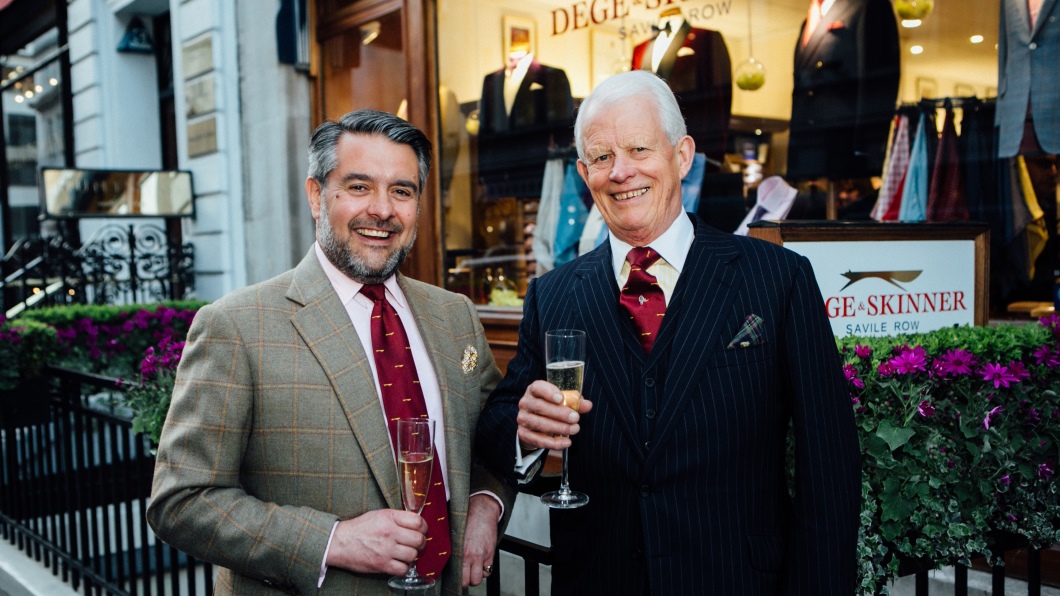 For Dege & Skinner to survive as a name, we have to adapt, says William Skinner. Daniel Evans reports.

For a street with more than its fair share of history, the incumbents at No. 10 Savile Row could be accused of being on the greedy side when it comes to assessing their allotted slice. Founded in 1865 by a German immigrant who arrived in England ten years earlier and still in family ownership more than 150 years later, Dege & Skinner can consider themselves as major players in any chronicle of the Row.

The firm’s current managing director, William Skinner, is delighted to have such an impressive past but is also realistic enough to know that the future can’t be taken for granted. “Being 153 years old is a great accolade. We have a huge heritage to draw on and a huge history,” William tells me when we meet in his office. “But we need to keep up with the times. We need to make sure we are relevant to today and tomorrow’s customer and that will be the challenge over the next five to ten years. With the advent of the internet, people expect things today – to have everything immediately. I hope we can maintain our presence on Savile Row but it’s not a foregone conclusion. For Dege & Skinner to survive as a name, we have to adapt.”

William is certainly the heartbeat of this buzzing firm. “I love the job,” he says. “The travelling, the challenges. It can be rewarding in terms of the people you meet and get to make clothes for but the business is the important thing – the people who work for it. I happen to have my name above the door but I don’t say people work for me, we work together. We all have a common goal. If the business doesn’t succeed, we are all out of a job.”

William takes me back to the 19th century when Jacob Dege arrived in England from Germany. “Jacob’s son and my great grandfather were at Merchant Taylors’ School together. They both had fathers in the tailoring trade but, when they left school, there wasn’t room for them in their respective family businesses so they went off on their own and set up Arthur Dege & Skinner. That went on in the late 1800s, early 1900s but then my great grandfather was killed in a riding accident in Richmond Park aged 42. My grandfather was 14 at the time and the Dege family continued his education until he was 16 and then put him in the business that is now Dege & Skinner.”

William’s father Michael, now the firm’s chairman, came into the business in 1953 with William himself joining in 1991, the fifth generation of Skinners. Michael was certainly thrown in at the deep end as one of the first things he had to do was to head down to Westminster for The Queen’s coronation. “My father and grandfather were at the House of Lords from about 5am,” says William. “We held all the coronation robes for the peers and the job was, on the morning of the coronation in 1953, to go and dress everyone. They had about 100 peers to look after, they had everything lined up and, as you can imagine, it was pretty much mayhem. Winston Churchill refused to wear the correct hat but instead insisted on wearing the Privy Counsellor’s hat.” 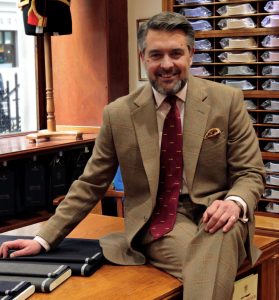 Dege & Skinner started off mainly as sporting and military tailors. There are a lot of adverts going back in the 1800s for riding clothes, and making uniforms kept the business going through the Second World War when they opened shops in Catterick and Aldershot. “We still make uniforms today,” says William. “We go down to Sandhurst and make the uniforms for the young officer cadets there before they join their regiment. We meet the cadets at the end of their second term and make their uniforms for when they pass out at the end of the third term. That means we have about four months to make the uniforms. We have a Royal Warrant to The Queen and have made uniforms for various members of The Royal Family. Prince William and Prince Harry’s first official portrait that hangs in the National Portrait Gallery is of them in Dege & Skinner uniforms.”

Clearly a lot has changed since 1865 but has anything stayed the same? “The overall process of making a bespoke suit hasn’t altered too much,” says William. “The process of choosing a fabric, taking measurements, having a pattern drafted, having various fittings as the process goes on, culminating in the finished fitting – how the coat will be made by a coat maker, the trousers by a trouser maker and those individual processes continue today. That is part of coming to a Savile Row bespoke tailor, to go through that process. That hasn’t changed in essence since those early days. What has changed is the style of garments, the weight of garments – they would have been a lot heavier in days gone by when you would spend more time outdoors or even indoors when there wouldn’t be any central heating. People prefer much lighter clothes now.”

Unsurprisingly, William puts the relationship between customer and tailor at the centre of everything. He says: “The customer puts their trust in us as their tailor to make sure they look good. That’s the primary purpose for us being here – to make sure the person who walks in to see us is dressed appropriately. It’s a symbiotic relationship – we give our advice as to what looks good on someone and they might have very different ideas as to what they think looks good. It’s a relationship that evolves over time. Ultimately, people want to put their trust in someone who knows what they like to wear.”

William feels that, even though Savile Row is centrally located, it is not the easiest place to find and, although he can’t actually move it, improvements are heading its way. “Savile Row is a street that isn’t connected to anywhere,” he explains. “It doesn’t go from A to B. It isn’t on a main thoroughfare. If you know where it is, you know where to go to – you don’t just stumble upon it. Some planned redevelopment to the public realm – pavement, carriageway and parking improvements – have just began and will be completed by the summer. This will greatly enhance the look and feel of the Row.”

William feels that Savile Row is not helped by its location but, although he can’t actually move it, he thinks improvements are heading its way. “Savile Row is a street that isn’t connected to anywhere,” he explains. “It doesn’t go from A to B. It isn’t on a main thoroughfare. If you know where it is, you know where to go to – you don’t just stumble upon it – but I think some planned redevelopment this summer regarding the pavement and the parking will greatly enhance the look of the street.”

Being one of only two privately-owned family businesses on Savile Row – the other is Henry Poole & Co – clearly means a lot to William. “I will always sing the praises of what we do as a profession because I understand what goes into it and the people involved in it are passionate. Having been brought up with a father who was very passionate about what he did, a lot of talk at home centred around the business. I liked the purpose of carrying on the family tradition – that means a lot to me. I have two teenage children. If they wanted to come into the business, I would want them to come in for the right reasons and I would expect them to bring something to the table rather than them feeling it’s their right. It wouldn’t be fair on them just to bring them in and tell them to get on with it. There are a lot of other things to do in this world. You have to want to do it and my advice to them would be to go out and get some experience elsewhere and then, if you want to come into the business, come in.”

When we meet, William is preparing to go out to Hong Kong for the first time. “It’s always been quite a global business but it seems to be stretching a bit,” he says. “We do a lot of business in America, Europe and the UK and also the Middle East. Now it’s going further out to the Far East and, soon, Hong Kong. We need to maintain existing relationships with our customers but we also need to make sure we can get into the markets that want to have bespoke clothing made for them. We offer something eclectic, niche and unique and we need to keep telling people our story.”