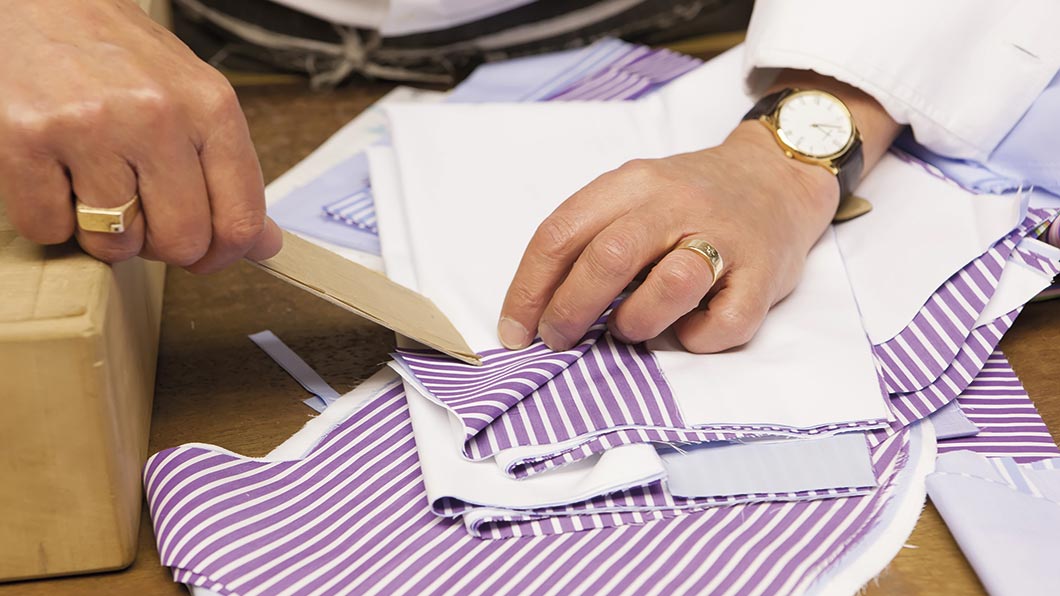 Dege & Skinner is the only Savile Row tailor to provide its own one stop bespoke shirt making facility. Cutter Tom Bradbury tells Daniel Evans about learning this rare craft.

If it weren’t for his grandfather, Tom Bradbury would probably not be talking to me now, front-of-house at Dege & Skinner, explaining the intricacies of bespoke shirt making and the enjoyment he gets from being involved in such a specialist craft.

Like a lot of young people, when he was 16 Tom began his A levels but decided it was not for him – “I don’t know why I tried. I hated doing tests,” – so he ended up spending a fair amount of time with his grandfather, David. “He was a joiner so every Thursday I’d go and work with him, to learn his trade and skills,” Tom tells me. “We’d just do stuff together as I’d always enjoyed doing practical things with my hands. I told him I was interested in fashion and had been looking for work around Carnaby Street and he said: ‘If you want to be in the clothing industry then get yourself down to Savile Row and work with the best’.”

“I’d never heard of Savile Row and didn’t have a clue what he was talking about. It was never mentioned in school.

You have all these career advisers but they never discussed the clothing trade and that the height of luxury was to get a suit made in Savile Row. You just don’t get taught that sort of thing at school.”

So, armed with his grandfather’s advice and his own CV, Tom came up from his home in Orpington to London and went in and out of the shops on Savile Row. Tom, now 24, takes up the story. “I came into Dege & Skinner and talked to the person by the front door. ‘Can I speak to the MD?’ I asked. ‘That would be me,’ said the man.” 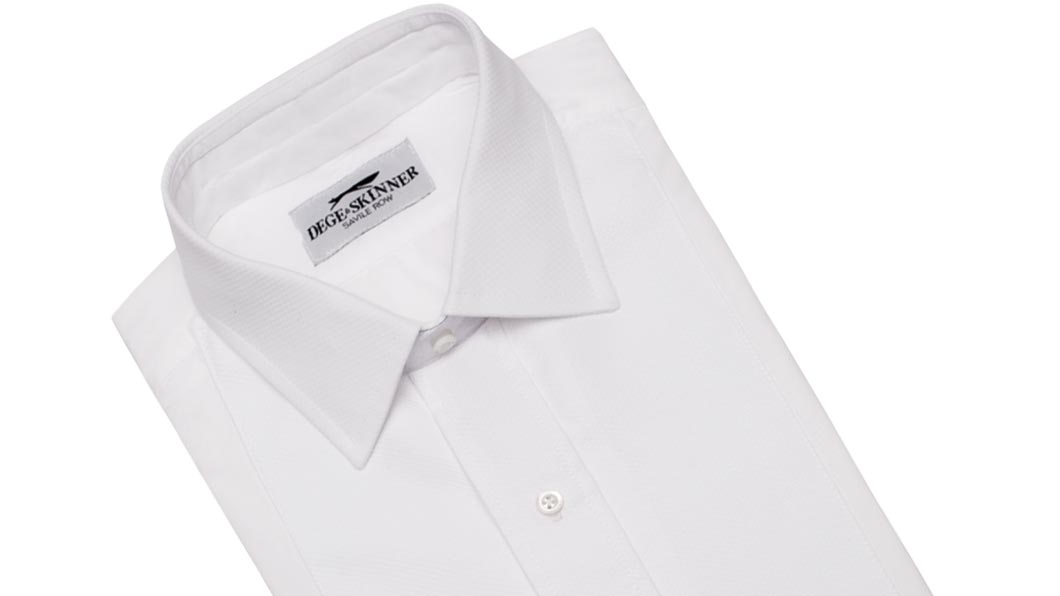 Tom was not to know that the person by the front door was, in fact, William Skinner, Dege & Skinner’s managing director. “We began to chat and he was asking me lots of questions,” remembers Tom. “It was like an interview which you hadn’t prepared for. We stood in the front shop for quite a long time. He showed me around and introduced me to people, including the head cutter Peter Ward and others in the back room. William then asked me if I was doing anything the following week and whether I fancied coming in to do some work experience. Of course, I said yes.”

Over the moon
“I spent the whole day cleaning the shop. I was too scared to take my jacket off. It was the middle of June and I was absolutely sweltering. At the end of that day, William asked me whether I wanted to work for the rest of the week. I said: ‘Yes, of course’. But, at the time, I only had one smart shirt so, every day, I had to go back home, wash my shirt which was black from dusting, dry it overnight and iron it in the morning before coming back in. At the end of the week, I was offered a job. I was over the moon. I also got some money for the work I’d already done so I immediately went out and bought myself a few more shirts because I didn’t want to be doing the one shirt thing for too long.”

Soon after joining, Tom got to know Robert Whittaker, the veteran head shirt cutter at Dege & Skinner, and was keen to learn from him.

“I knew I wanted to ask him whether he would take me on as his apprentice but was too nervous,” recalls Tom.

“I had it in my head that I would talk to him about it but bottled it every single day and then, as we were going home one Friday, I found a bit of confidence and asked him.”

Tom was understandably
delighted when Robert agreed and began his apprenticeship. “Robert has taught me everything I know about shirt cutting,” Tom says. “I started from scratch. I’d never picked up a set of shears in my life. I’d never done anything like that.

Robert moulded me into what he wanted me to do, which was good, rather than picking up bad habits. He’s a bit of a character. I found him quite intimidating to start with but he always looked out for me and gave me stuff to do. I’ve got so much respect for Robert. He took the time to teach me and I could well see myself passing on that knowledge to others in the years ahead. I can’t thank him enough.”

Now Tom spends his time as a bespoke shirt cutter at Dege & Skinner, the only establishment on Savile Row which offers such a service. “It’s a proud thing to say,” says Tom. “We measure a customer up, ask some questions about how they would like the fit, what type of collar shapes they like. We make all sorts of shirts, from business shirts to more casual ones.”

I ask Tom to tell me why people should invest in a bespoke shirt. “Because it’s made just for you,” he says without hesitation. “It’s individuality – the fact you have put your ideas into it.

The fit, the elegance. It’s hard to explain until you’ve had one made and then you are never happy with anything else. We have had so many customers come in who have been given a bespoke shirt as a present, for a birthday or for Christmas, and who have come back a few years later to order some more because nothing else compares. Once you’ve had one, you can’t go back.”

Huge variety
“There is a huge variety of shirts you can have – the choice is unreal. You may just want a white shirt but then you think about what type of white shirt – if you are at a business meeting with 20 people in white shirts, you want to be wearing the best white shirt in the room.”

Although the classic white shirt remains the most popular choice, Dege & Skinner has plentiful options in collar styles and the softest Swiss, Italian and British two-fold 100s to two-fold 300s cottons, with either double (French) cuffs or two-button single cuffs.

Typically, it takes between two or three fittings for a single shirt, which will be turned around in eight weeks. This shirt will be used as a template for multiple orders. The tailor has a minimum order of four shirts, but some customers order two dozen at a time.

Prices start at £285 plus VAT for a simple handmade shirt but can run into the thousands.

“The most unusual shirt we had was an Egyptian-printed African style like you see in Nigerian headdresses. The only problem is that you have to match the patterns up, which is a long old job,” says Tom.

The job involves a fair amount of travel – Tom goes to America three or four times a year for two weeks at a time – but it’s not as glamorous as it sounds. “I remember Robert telling me that it was good fun and that I’d enjoy it but that it was hard work – and he was right,” he says. “Some of my friends say it sounds like a bit of a jolly but it is pretty tough going.”

Tom’s grandfather died less than a year after his grandson started at Dege & Skinner but not before he came to London to see him at work. “He did come up a few times and we enjoyed a pint in the local pub, which was nice,” recalls Tom. “To be honest, if my grandfather hadn’t told me to come up to Savile Row in the first place, I probably still wouldn’t know where or what it was.”