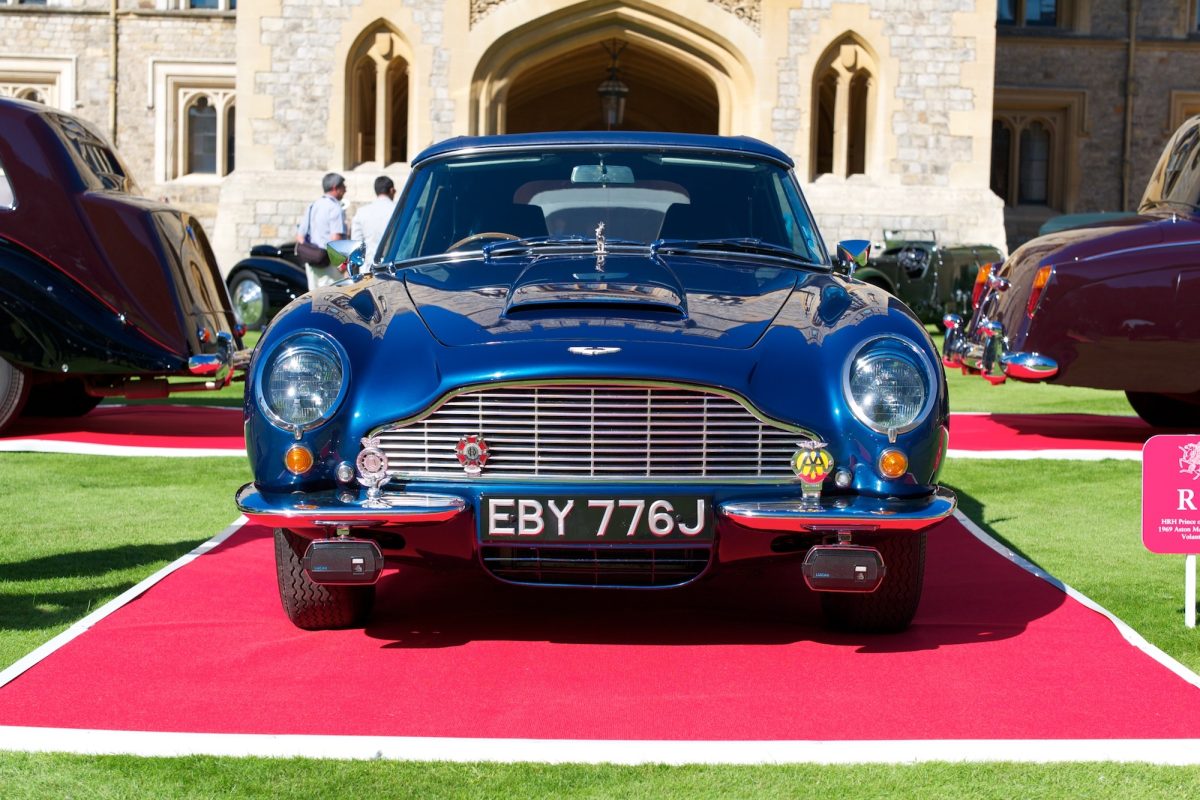 The Prince of Wales’s beloved Aston Martin DB6 Volante will be one of the star attractions at The Concours of Elegance at Hampton Court Palace this weekend (Sept 2-4). The show, presented by A. Lange & Söhne, will assemble the very finest examples from Aston Martin’s history. The Prince of Wales’s open top Aston was unveiled at the 1966 London Motor Show, right in the middle of the swinging 60s, one year after its Coupe sibling. Finished in the striking hue of Seychelles Blue, the car has been treasured and enthusiastically used ever since. This September’s event – which proudly supports the Prince’s Trust – will see this wonderful DB6, which remains in superb condition, take its place within the palace grounds.

The display will also welcome an Aston Martin DB5 with a difference: one with a thunderous V8 motor under that familiar long bonnet. A fascinating one-off example, ‘NPP 7D’ was the first factory prototype used to develop the V8 engine earmarked to replace the long serving, Tadek Marek designed straight-six, an engine in use since the introduction of the DB4 in 1959. The test mule was constructed by Aston’s engineers at Newport Pagnell in 1966 using a DB6 chassis, cloaked in a modified version of the DB5 body. As one might imagine, the platform – designed to house a 4.0-litre six – required major surgery to accommodate the substantial 5.3-litre V8, with the engine bay and transmission tunnel both extensively re-worked. The resulting car, finished in Pacific Blue paint, was put through an exhaustive testing process, in which it was sampled by the great and good of the Aston Martin world – including famed engine designer Tadek Marek.

The glamorous event will welcome another exceptional Aston Martin to Hampton Court Palace – to many the most beautiful of all: the DB4GT Zagato, in its most special form, no less. Combining the proven, high-performance DB4GT mechanicals with a stunningly stylish – and light – aluminium body by Italian coachbuilding house Zagato – the DB4GT Zagato represented the best of all worlds; the ultimate 1960s road and racing Aston Martin. The car that will be on show in under two months’ time is chassis number 1093/R, the third of the MP209 ‘ultra-lightweight’ motorsport orientated examples, finished in the arresting hue of French Racing Blue.

Built in 1962, the lightened special was delivered new to committed Aston Martin enthusiast and racer Jean Kerguen. 1093/R competed at Le Mans in ‘62, returning a year later with a series of mechanical upgrades and aero additions including a small rear spoiler, designed to improve stability in the high-speed sections of the course. With its svelte Zagato shape, the 4.0-litre straight-six was hitting over 170mph on the Mulsanne straight; an MP209 Zagato bodied DB4GT was a seriously fast car. Recently restored by Aston Martin specialists RS Williams, 1093/R presents in peerless condition.

A conventionally bodied DB4 will also join the 70-strong concours field, a lovely series 2 car with a colourful history. The charming example is one of the 349 Series 2 cars. Introduced in 1960, a year on from the DB4’s launch, the Series 2 cars packed a raft of modifications that aimed to rectify the ‘teething issues’ encountered by Series 1 owners. Among these changes was a front-hinging bonnet, the thinking being that if the latch failed at speed – presumably something of a concern – the hood would not fly up and obscure the driver’s view of the road ahead. Cooling of the 3.7-litre, 240 bhp in-line six was also improved with a larger sump and uprated oil pump.